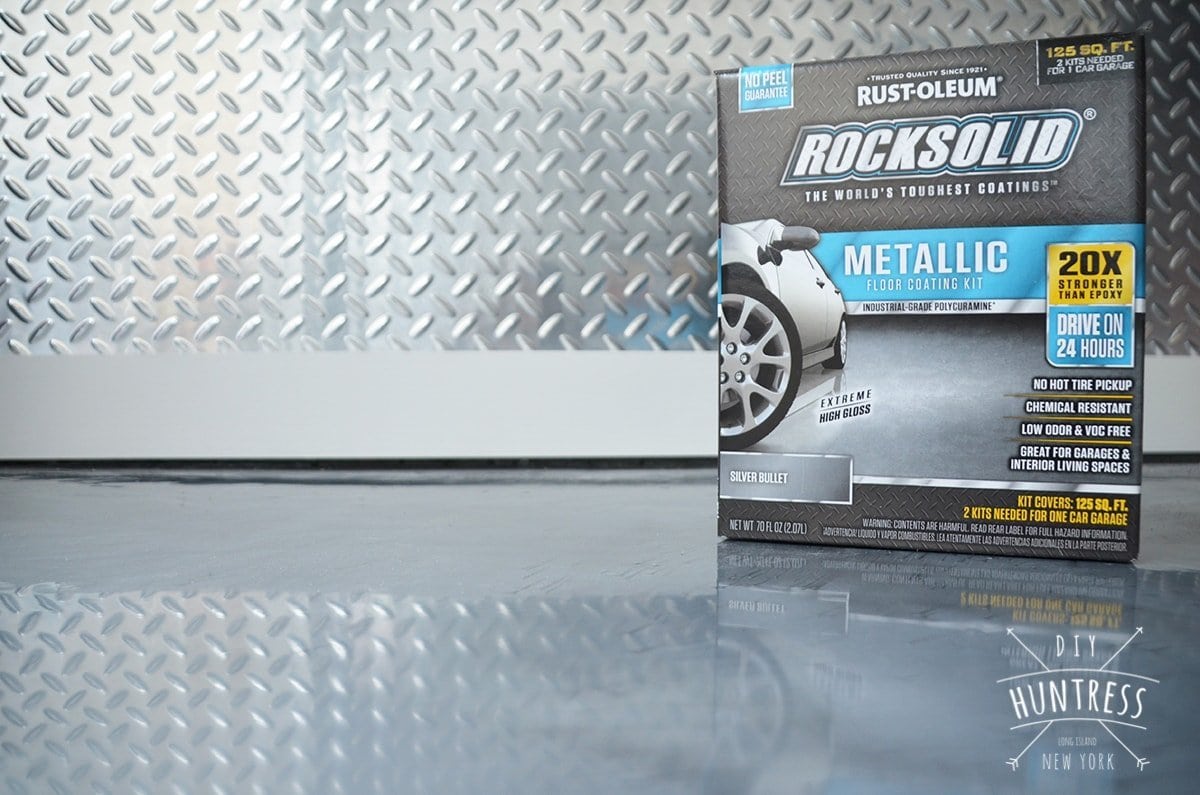 When Rust-oleum reached out to me and asked if there was a spot in my home that I wanted to overhaul into a retreat, my mind immediately jumped to a space that was not mine – my dad’s garage. My dad has been through a lot in the past few years, and all the while, he’s managed to teach me the coolest stuff. So, this was my chance to finally give back. We were able to overhaul his garage on a $750 budget (plus the flooring) and learned some cool tricks on the way – like, how to apply Rock Solid Metallic Flooring Kit to a concrete slab with a textured surface (you’re welcome, textured floor owners). Here’s our story…

If you follow my blog, or my posts on social media, you’ll know that I always credit my dad with teaching me everything I know…  how to build, how to design, and how to eat a mean slice of pizza in like, three bites. But, for serious, the best thing he has ever taught me is that it’s never too late to appreciate life and start over.

I promised I’d share his story, and although it’s a rough one, there’s a moral (and the reason behind his business’ name) at the end of it – so, hang tight.

Shortly after I graduated high school in 2008, my family and I received a call that my dad was in the hospital with severe injuries. He was working on a construction site when his shovel hit an illegal power line in the ground. The line, which powered a traffic signal, electrocuted him and he was thrown 20 feet into the air. The paramedics on call feared he didn’t survive. But, he did. However, he was severely injured. The electric not only fried his body, but essentially shorted his cognitive abilities, fused the muscles in his hand together, and destroyed the cartilage in his cervical spine. Needless to say, he needed tons of therapy, surgeries, and TLC to live a semi-normal life (which, don’t get me wrong, he still struggles to do today). It was at any point during this process that he could have given up, but instead he looked at his accident as a second chance at life as well as a chance to do what he’s always wanted to do – leave his heavy-lifting job and restore classic cars.

That being said, flash forward to a few weeks ago, when his garage looked like this sad excuse for a shop (sorry, dad). It was dark, dingy, cluttered, and impossible to work in: 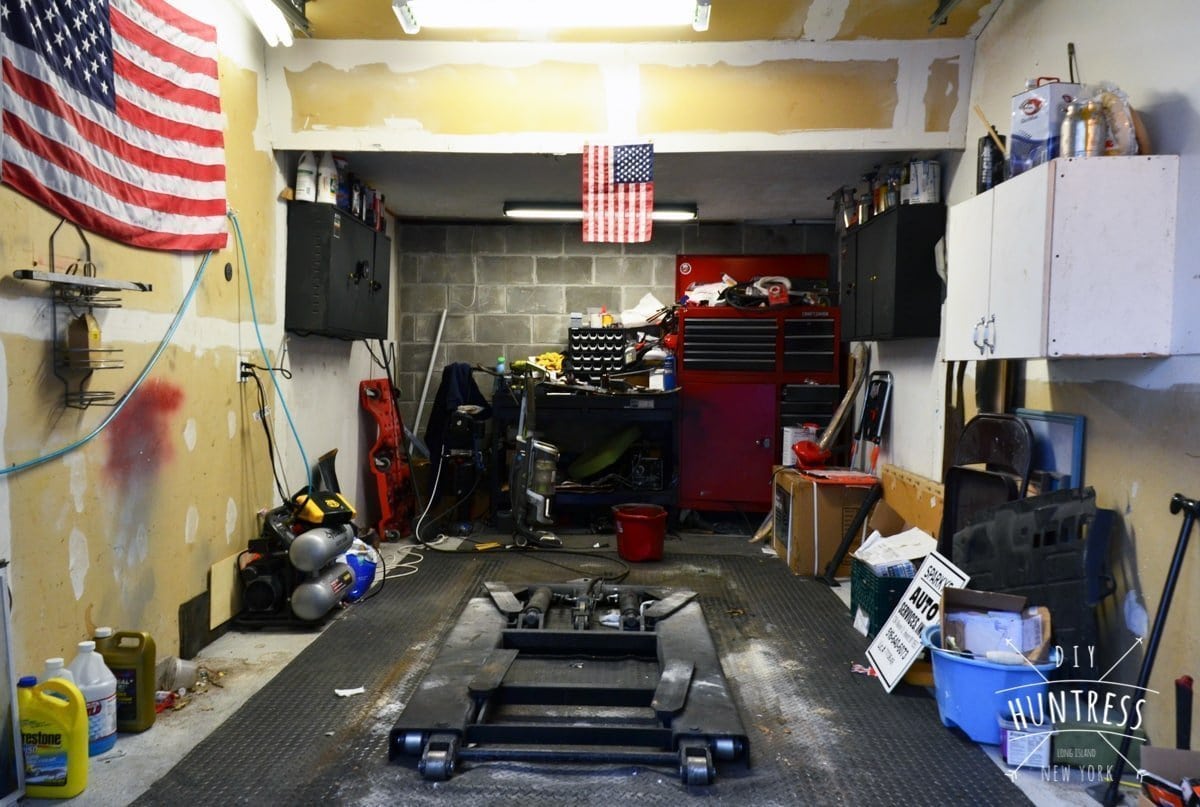 But, thanks to Rust-oleum, he now has a real second chance at life with a legitimate shop. Taa-daa! 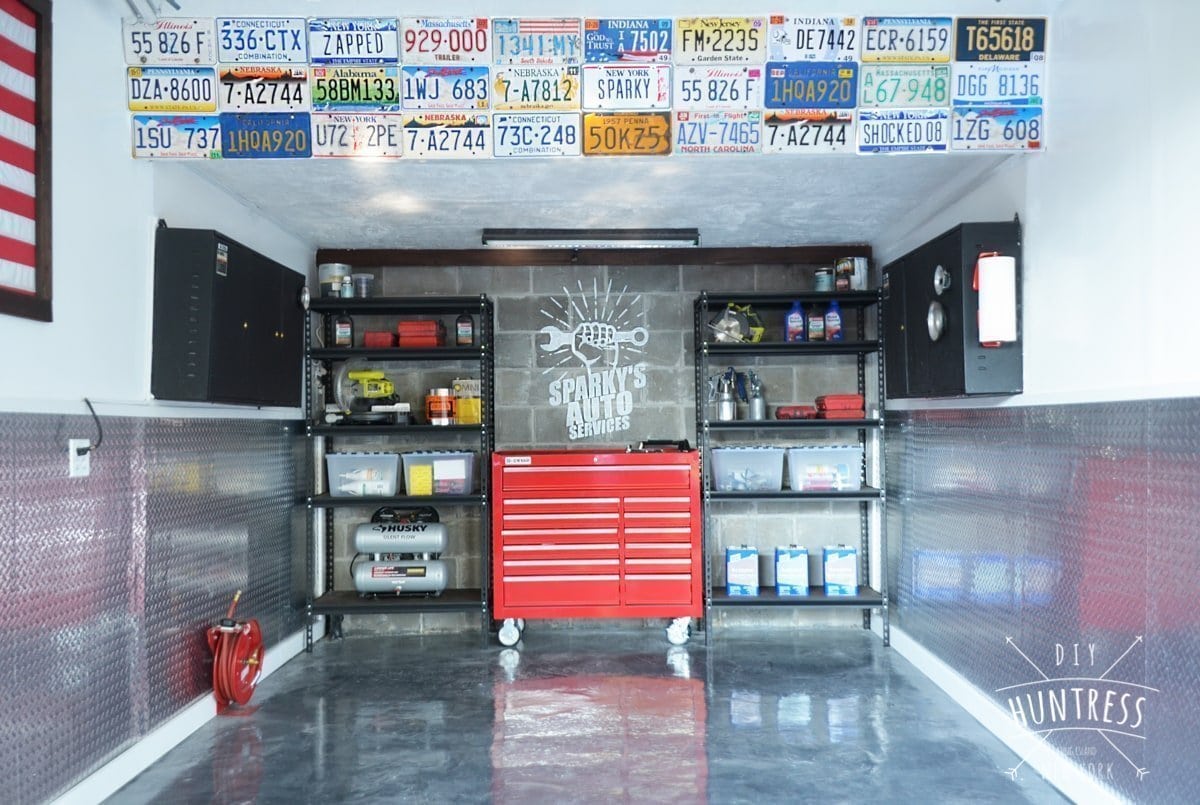 Not including the floors (because, thank you, Rust-oleum), we had a budget of about $750 for this build, and we were able to get A LOT done. Here’s what we did:

First, we cleared the space – which, sucked. My dad has so much crap. It’s pretty impressive. 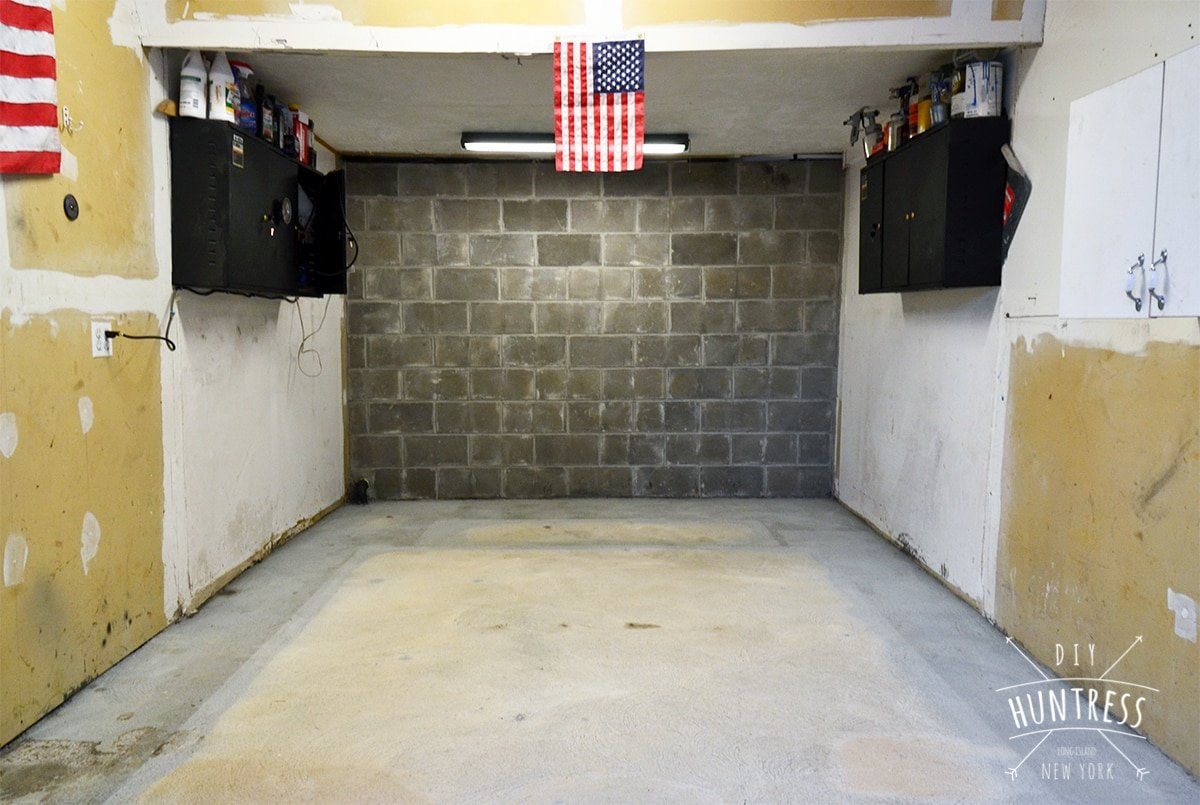 Once the space was clean, we were able to begin the flooring process using our Rust-Oleum Rock Solid Metallic Flooring Kits (we used four boxes for a long, 1 and ½ car garage).

First we soaked and etched the floor (aka, just gave it a real, good acid washing). 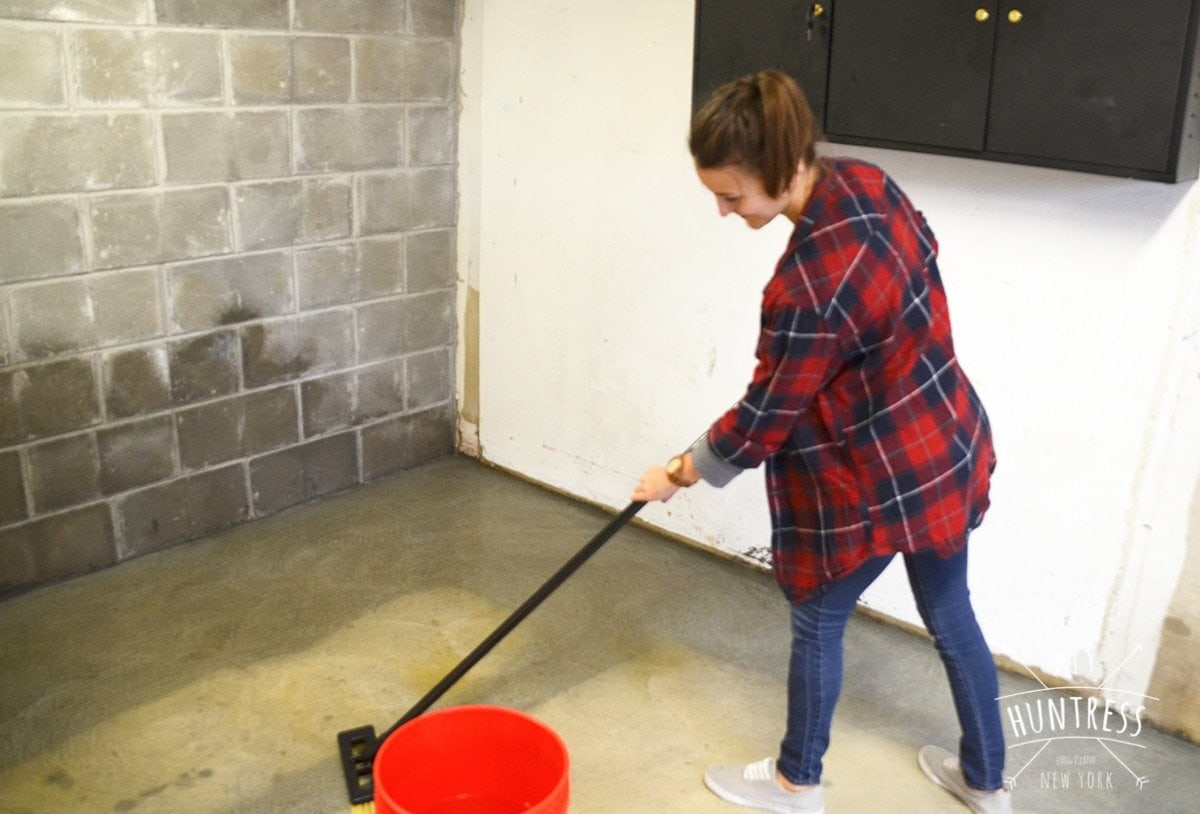 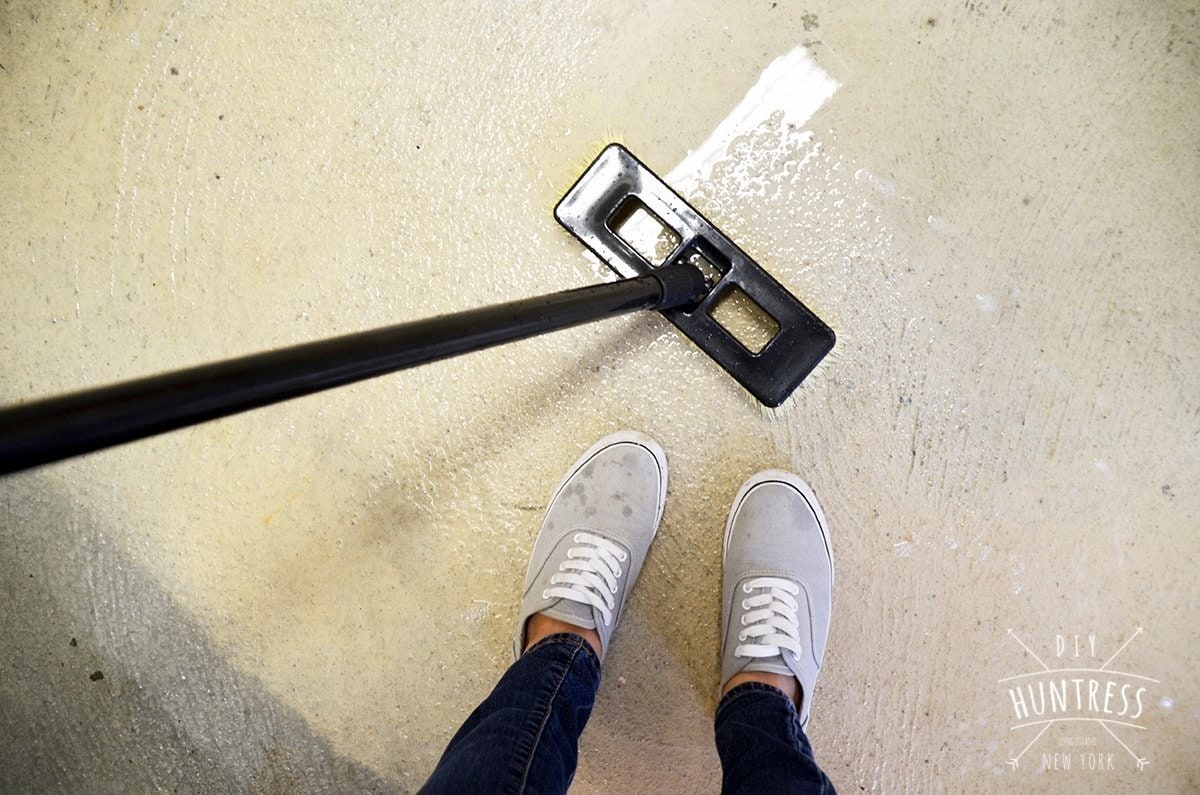 Then, after letting it dry for about a day and a half, we were able to mix the new flooring by following the instructions on the package. 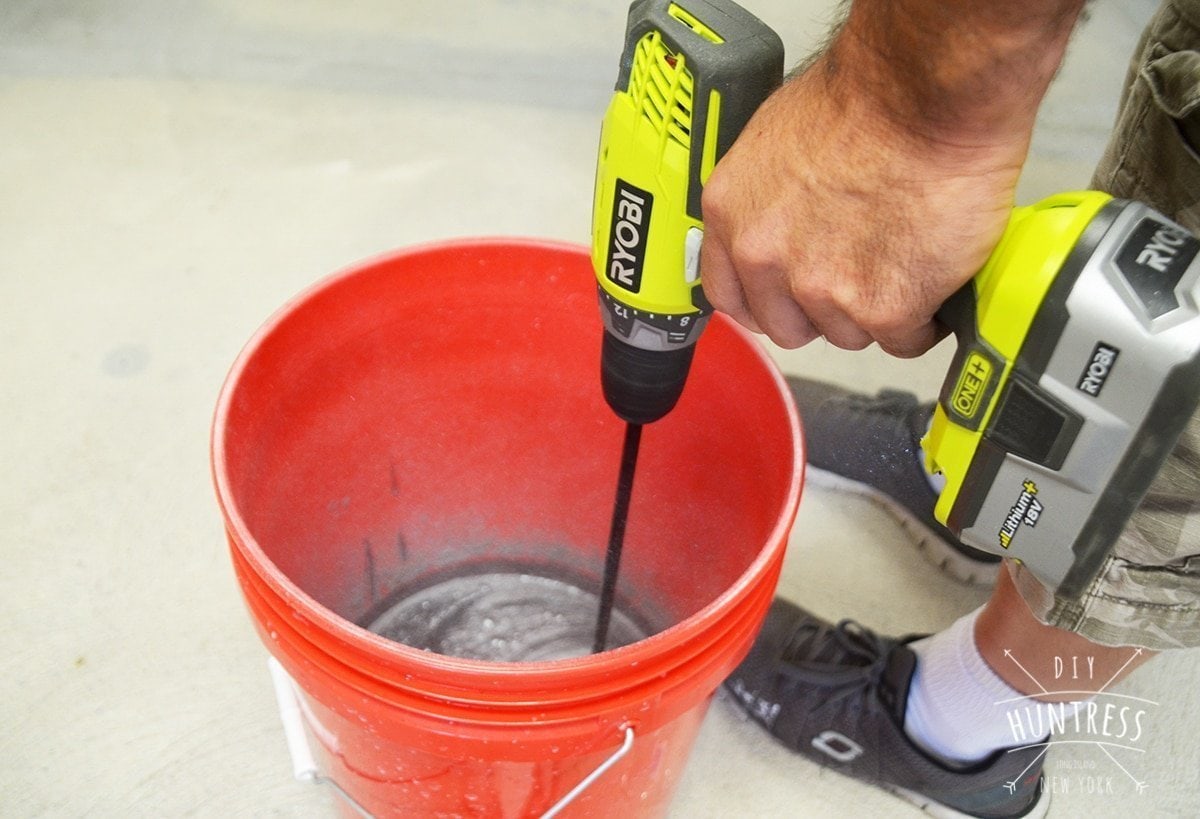 Next, we applied the floor. You guys… this is so helpful… if you have a textured floor, like in my dad’s garage, there’s a different technique you can use to apply the floor! For flat surfaces, a roller is the recommended installation tool. But because our floor was textured, we ended up using a thick, synthetic brush to swirl on the product. This stopped any air bubbles from forming in the crevices (thanks Rust-oleum, for the tip)! 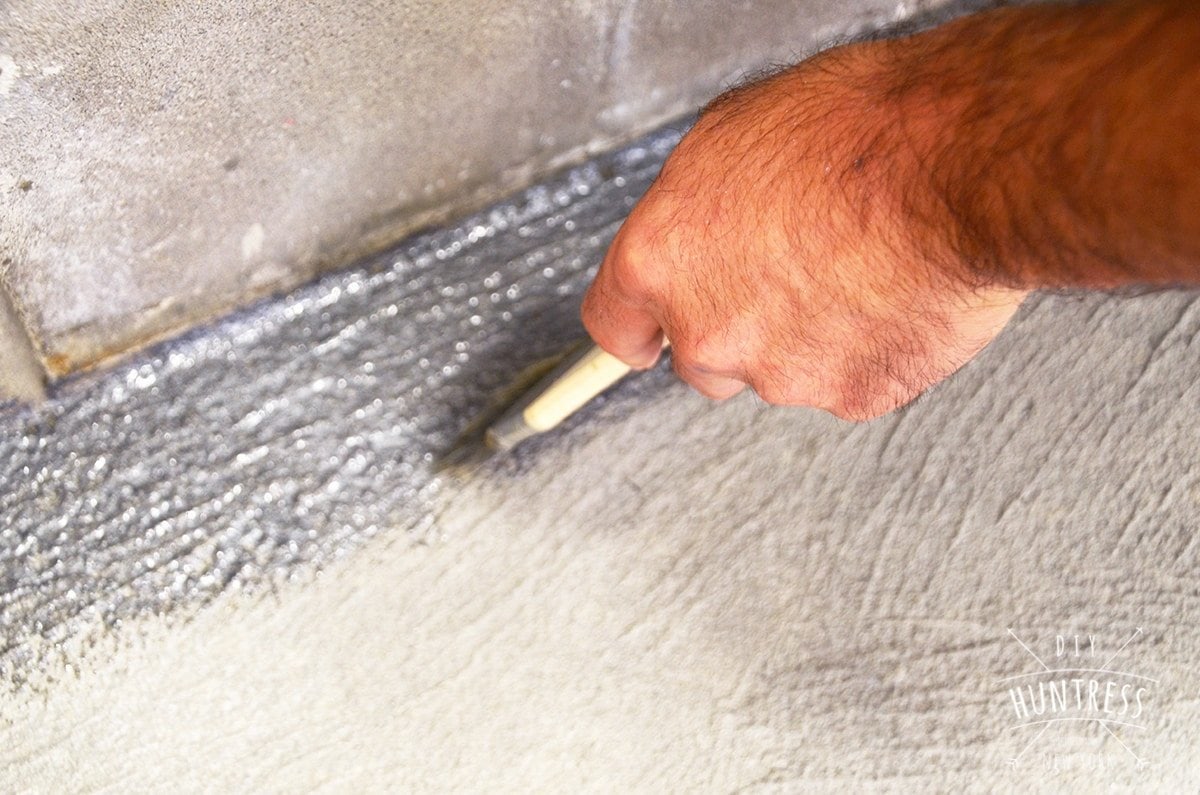 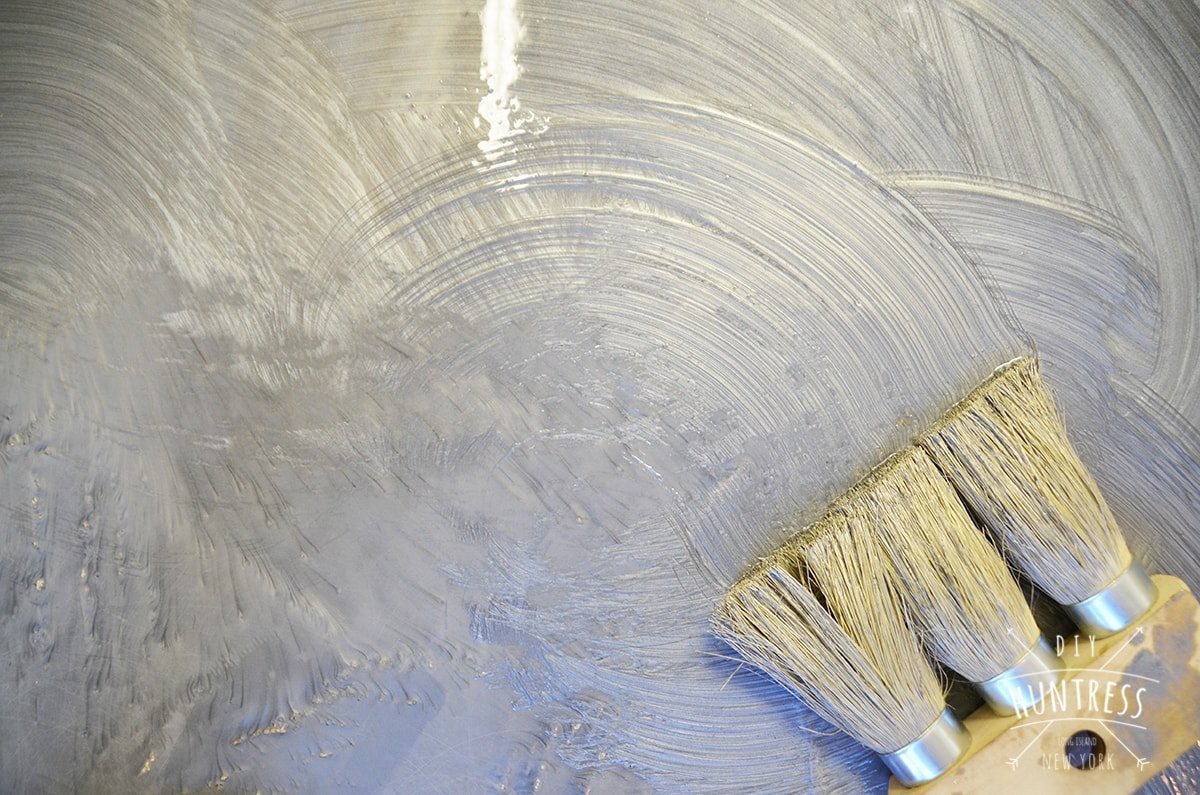 The floor took about 8 hours to dry to touch, but we gave it a solid 12-16 hours before even going near it. But, once it was dry (and looked amazingly cool), it was time to overhaul the space. 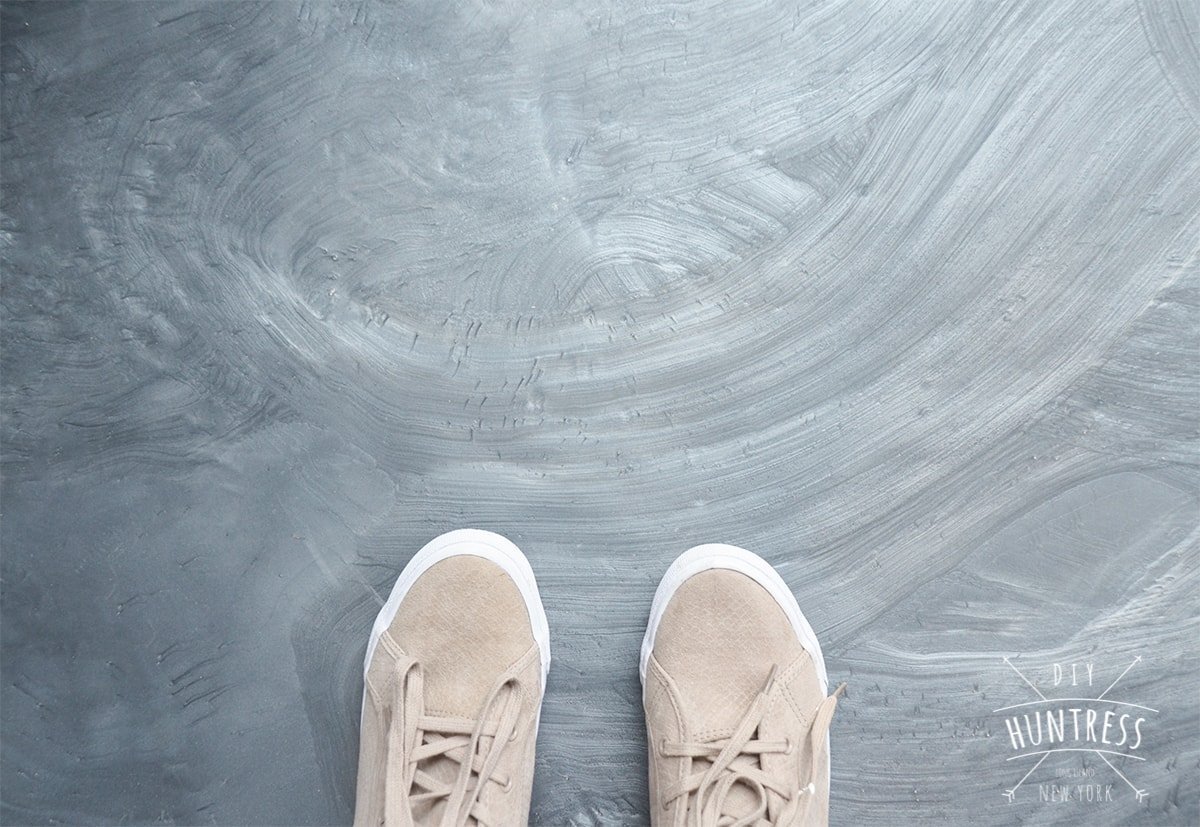 We taped and patched the walls, painted, and added some diamond plated panels (which basically blew our budget – they were $450 for 5 panels… ouch, but also, worth it). 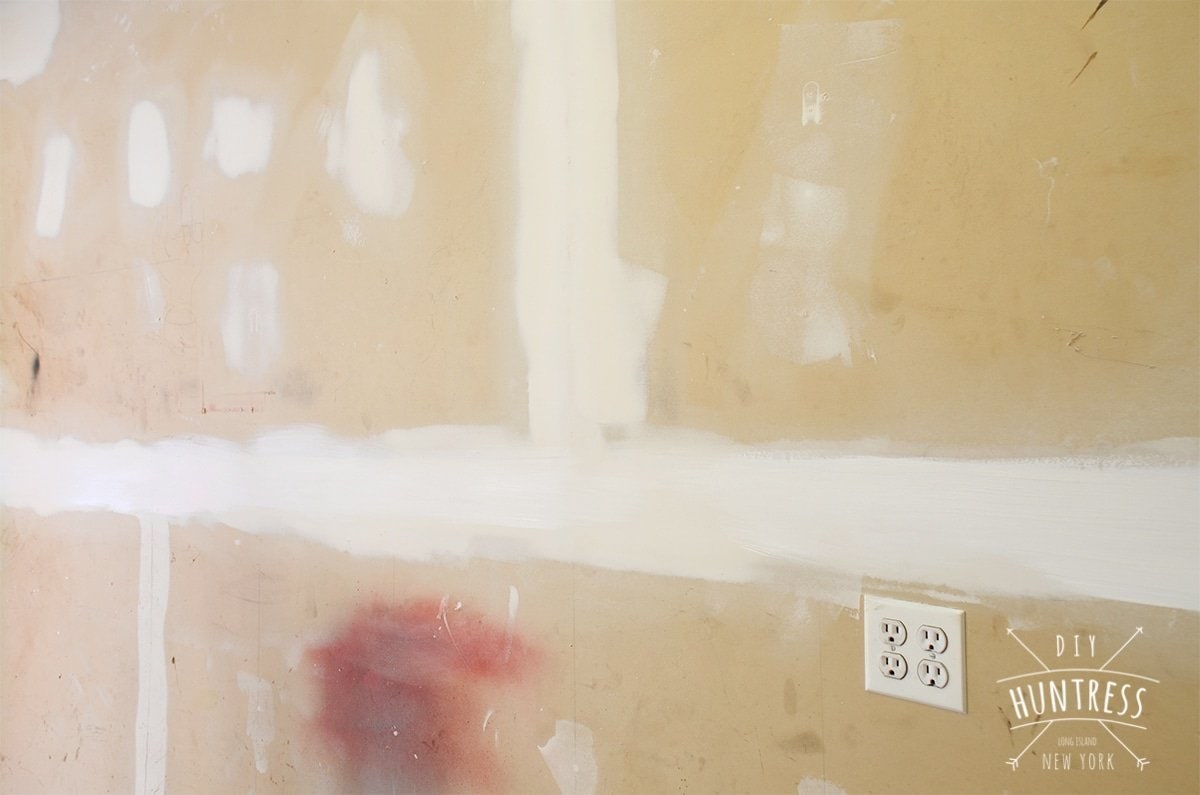 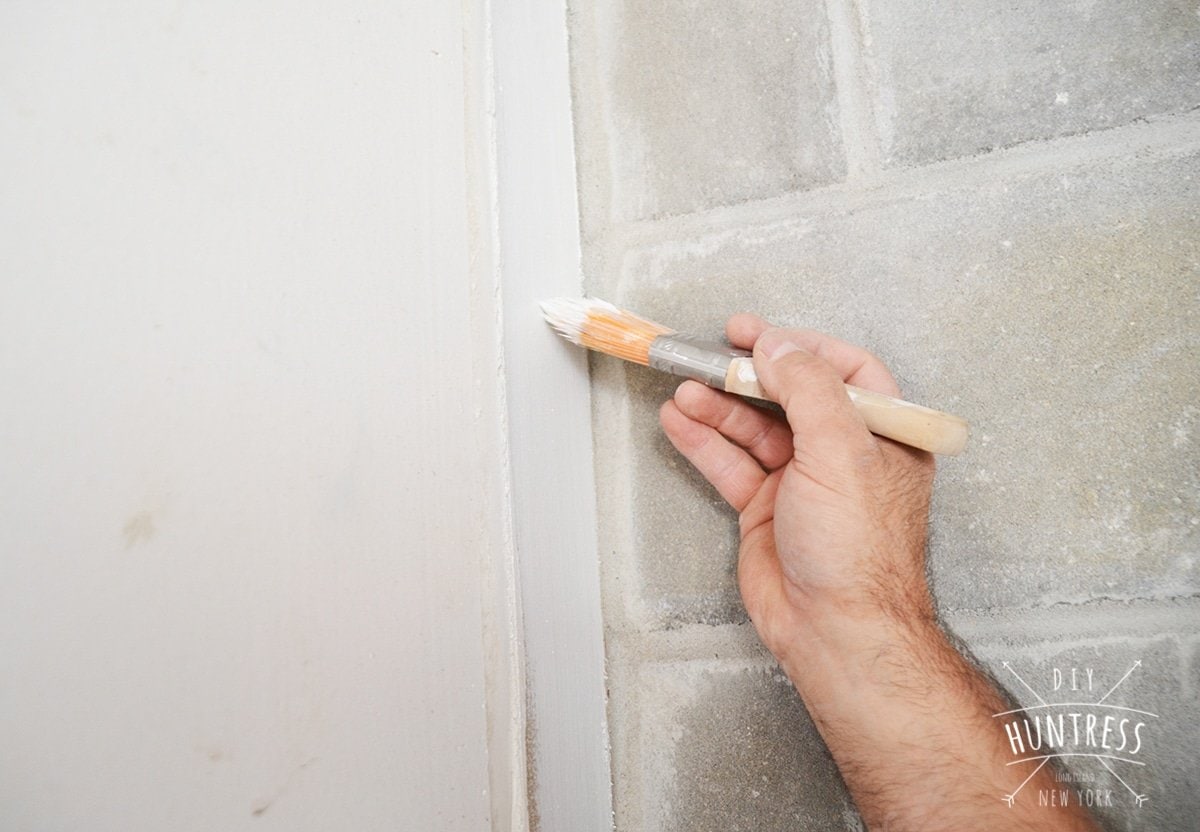 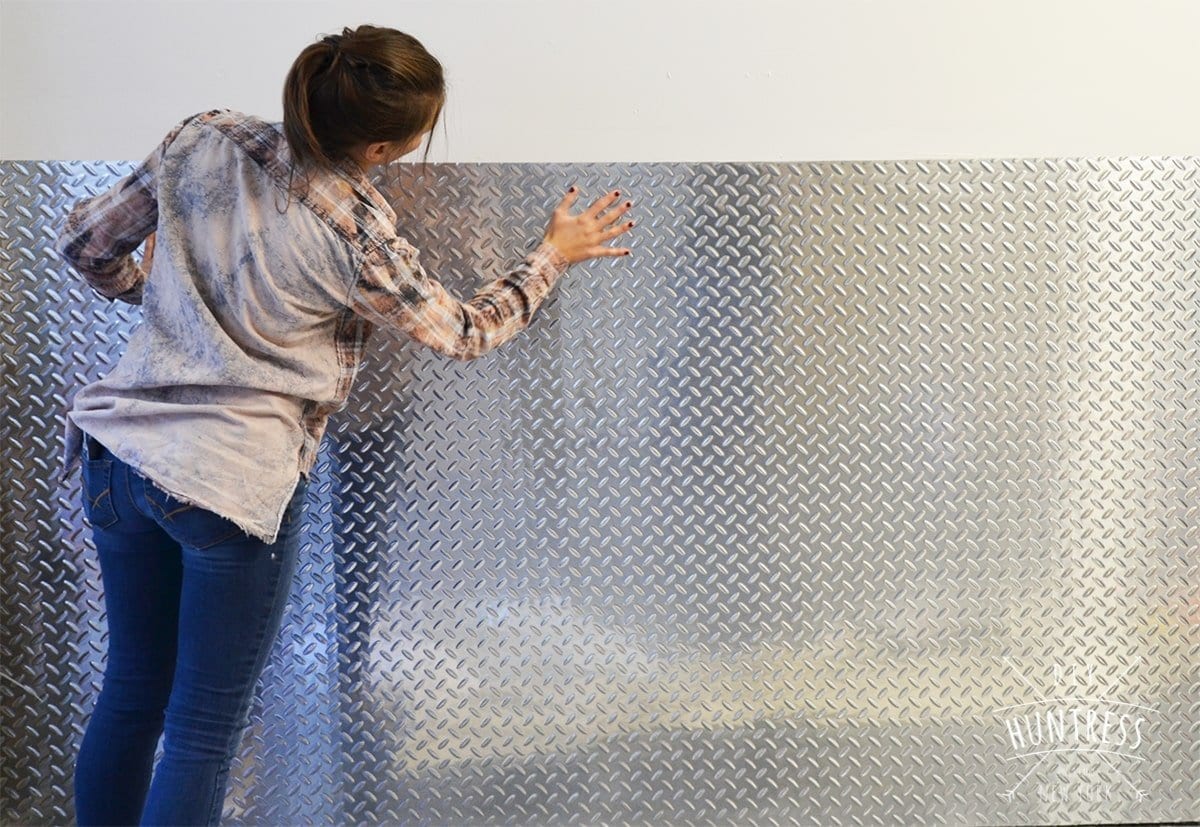 With the remaining $300, we were able to add some final touches such as new shelving units and a new tool stand.

And… for my favorite part. We installed an insanely cool license plate wall, which is made from donated plates, courtesy of the most amazing readers in the whole world (you guys, really – thank you so much to whoever donated a plate… my dad and I are OBSESSED). 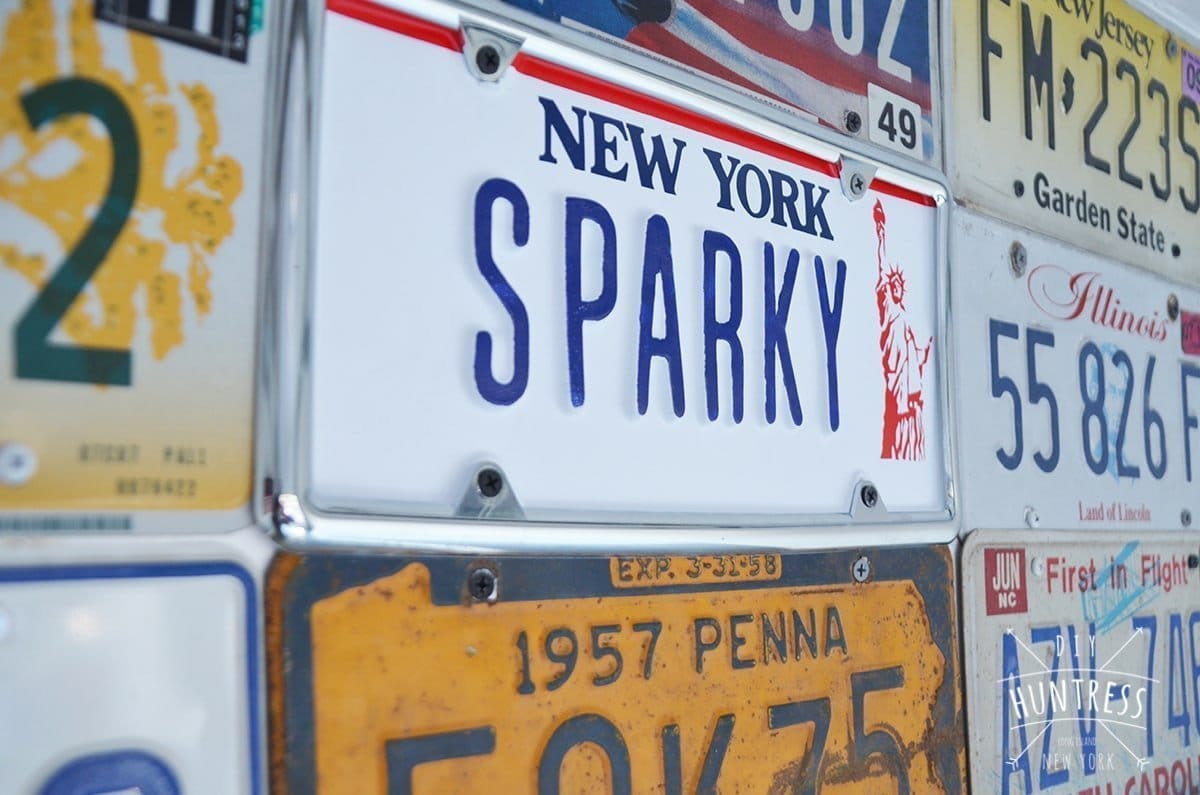 Lastly, there were two things I knew would put my dad over the edge. I designed and painted a cool new logo for him on the back wall with overhead lighting. In case you couldn’t tell, his business’ name is “Sparky’s” because of the accident… which, is actually pretty hysterical considering the circumstances. But, also not “shocking” at all considering my dad is basically the funniest person on the planet. 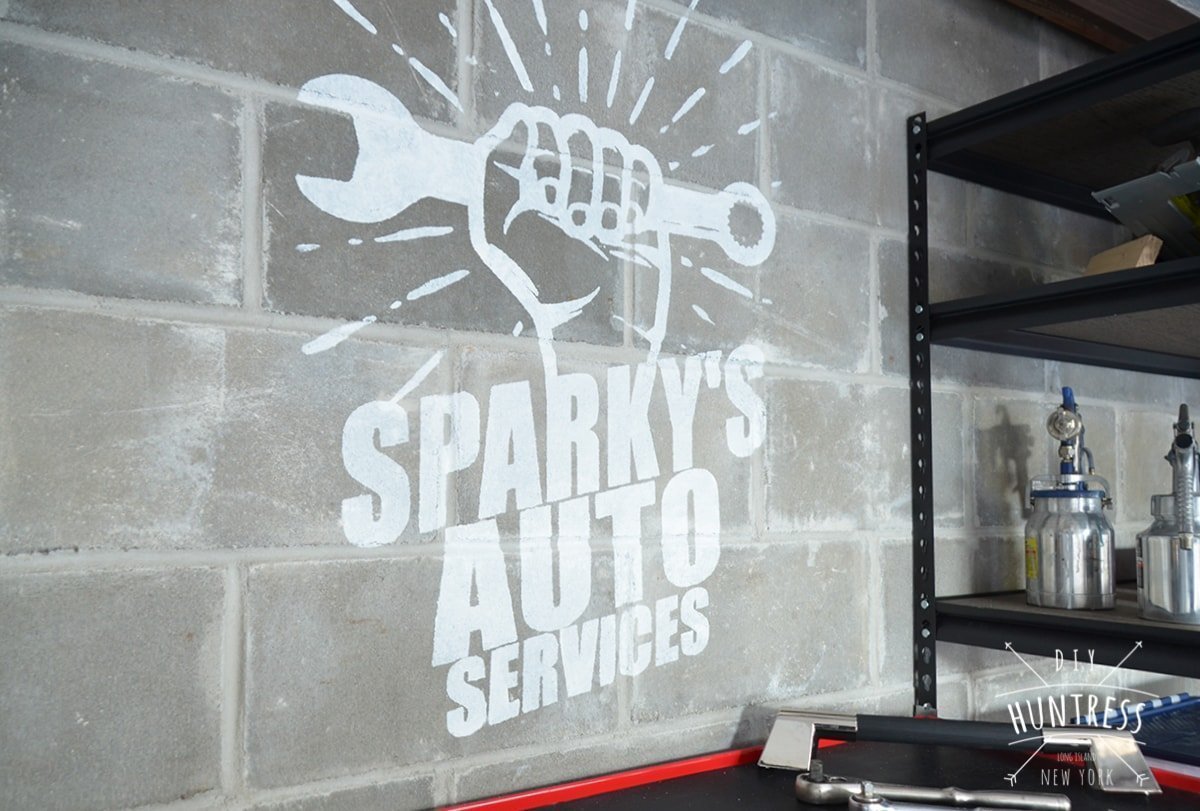 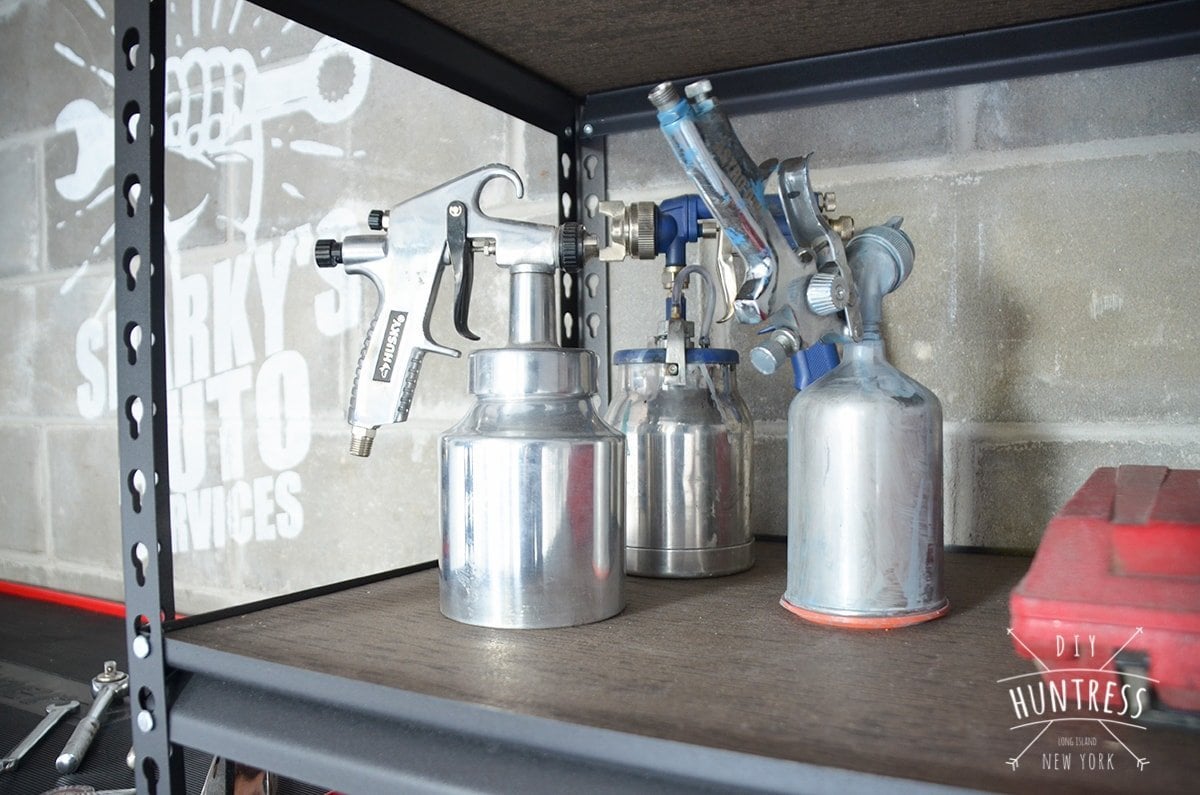 Second, I framed his favorite piece – his big, ol’ flag. 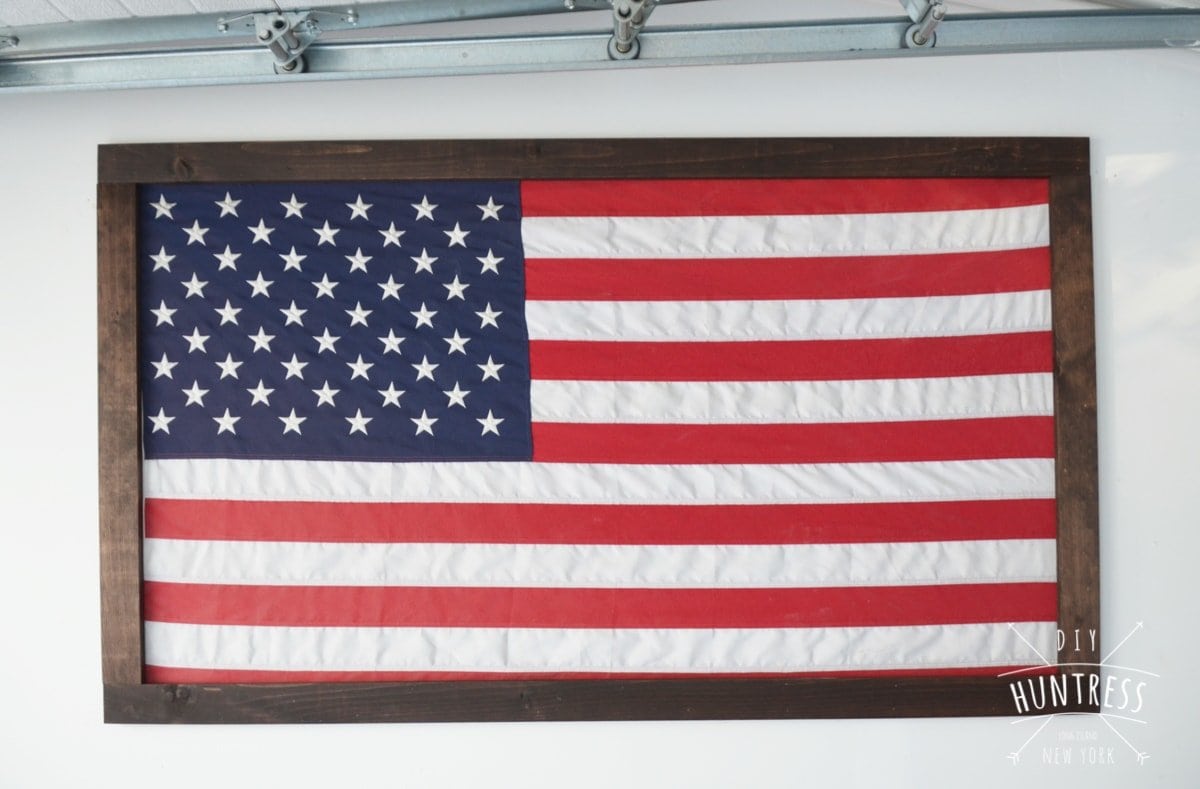 LOVE THIS GUY SO MUCH – his reaction made it all worth it
(also, please ignore the mess outside of the garage, it’s all being donated). 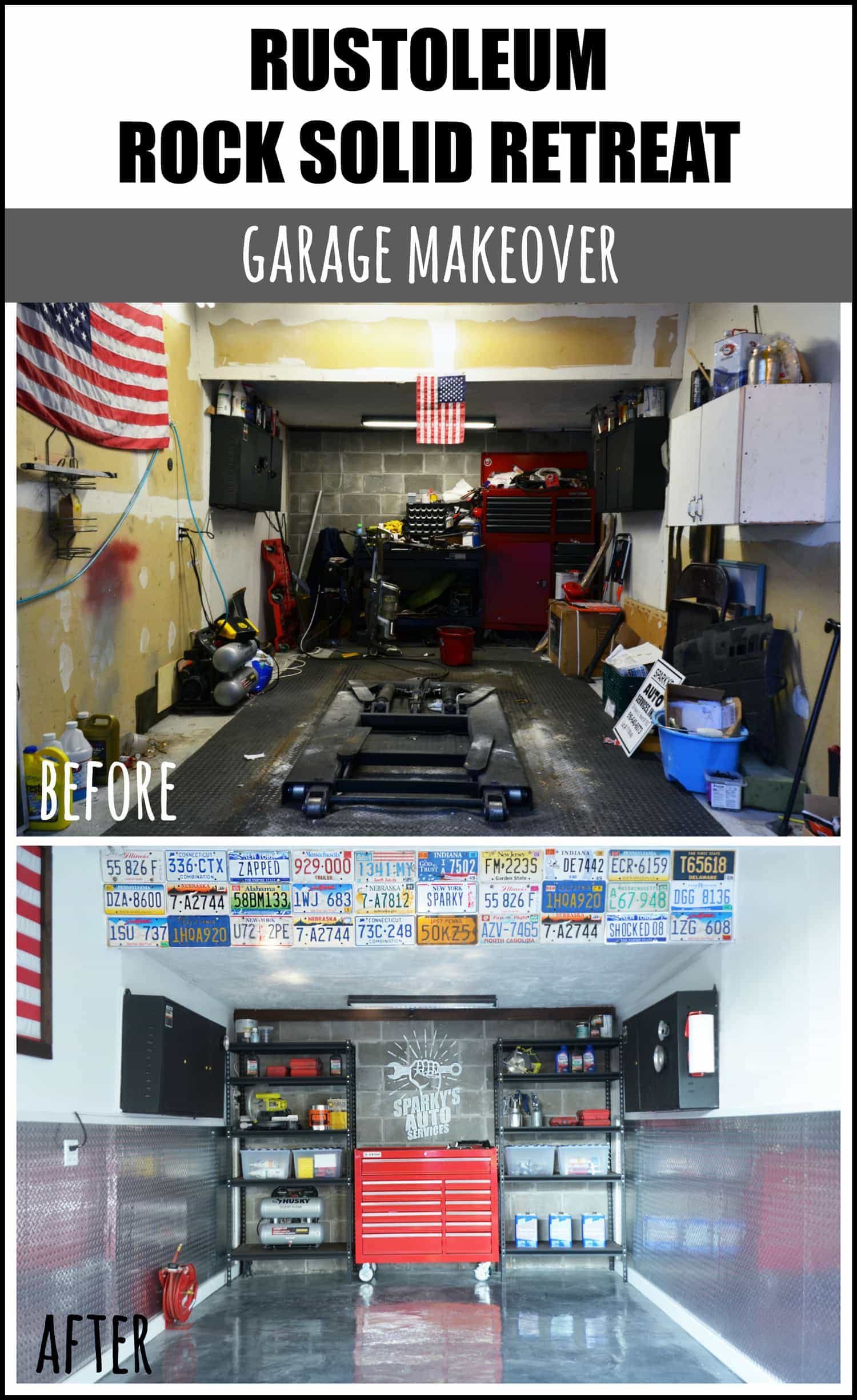 What do you guys think!? I know this wasn’t the typical post, but this overhaul was such a fun project! My dad and I were both stoked with the end result, and I cannot WAIT to see what he does with his new, new start in life.

Do you know someone who deserves a new start in life? Or, maybe you need one! Either way, Rust-oleum and I have partnered to give someone a $500 Home Depot Gift Card & Rust-oleum Rock Solid Kit! Make sure to enter below to win!

In the meantime, I’ll be policing my dad as he puts things back in his garage (he has no choice but to keep it neat now).

Hope this post inspired you to create your own Rock Solid Retreat, and if not, at least I hope taught you to never look back and always stay positive. Life is too short to live in the past. Let’s get moving!

** One last giant thank you to Rust-oleum for providing the Rock Solid Metallic flooring kits and $500 Home Depot gift card for use in this project. All product opinions, flooring colors, and designing liberties were of my own (and, also, my dad’s). 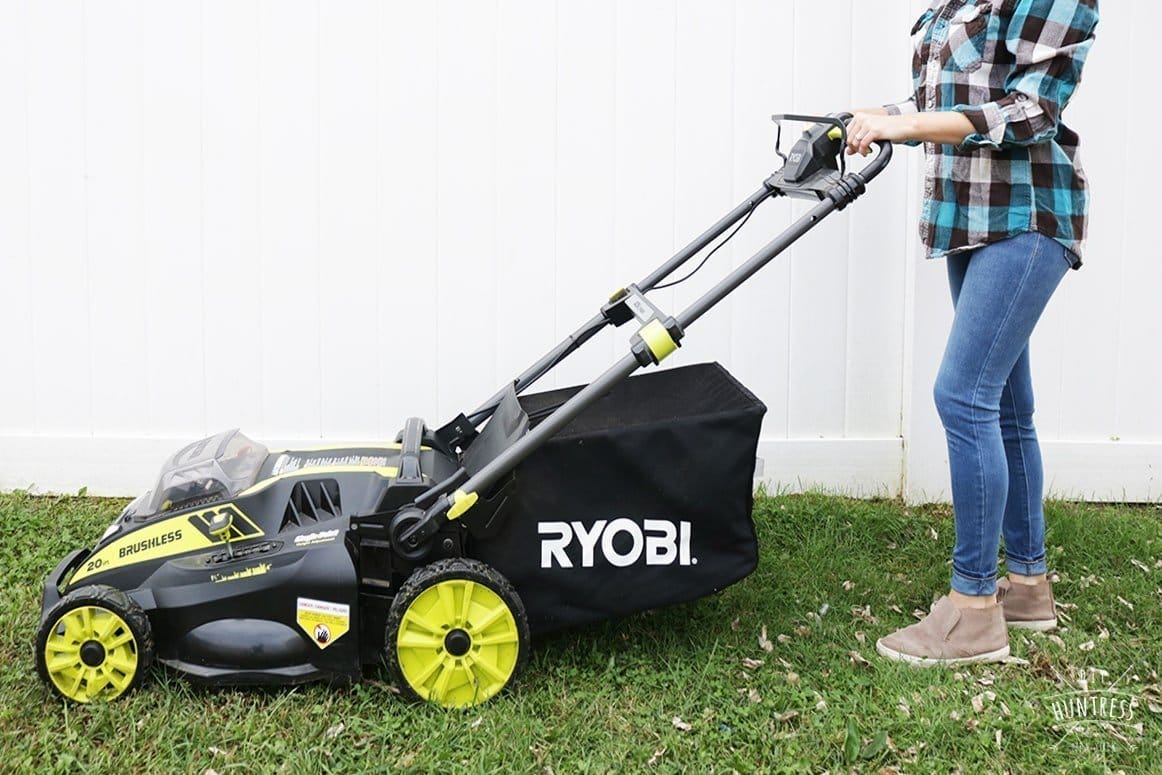 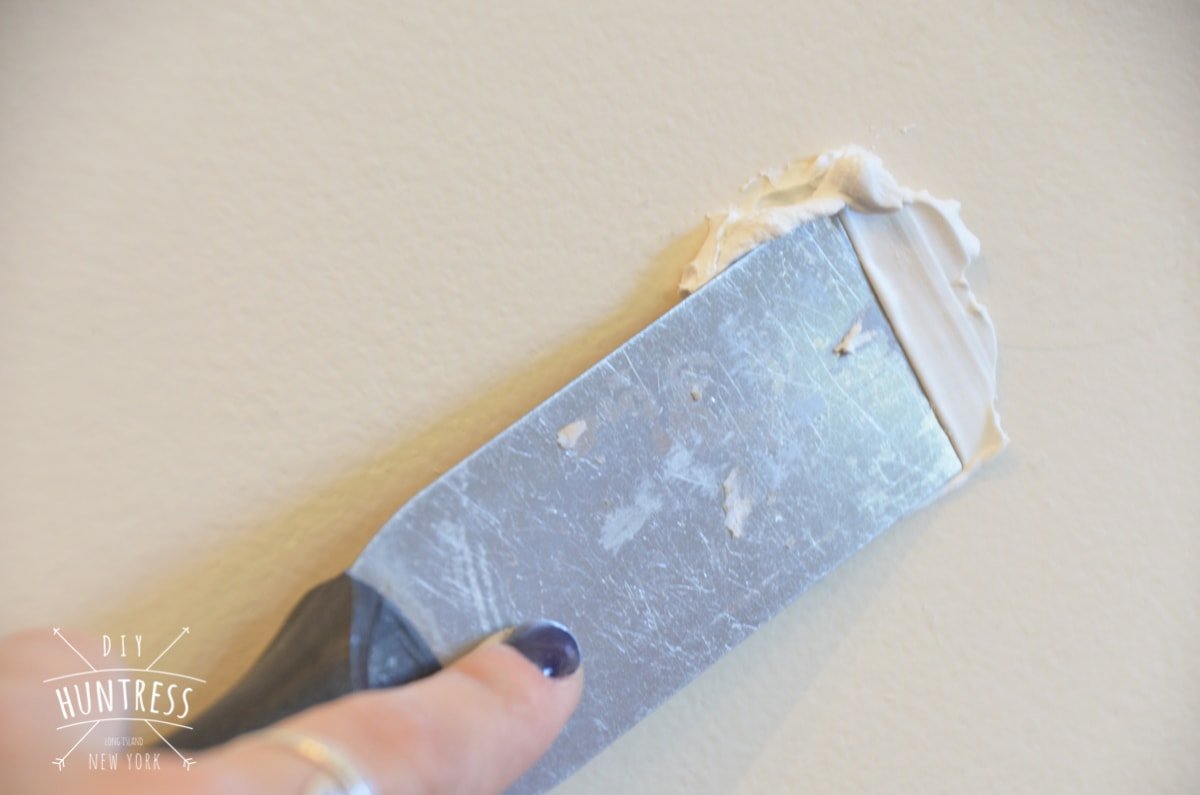 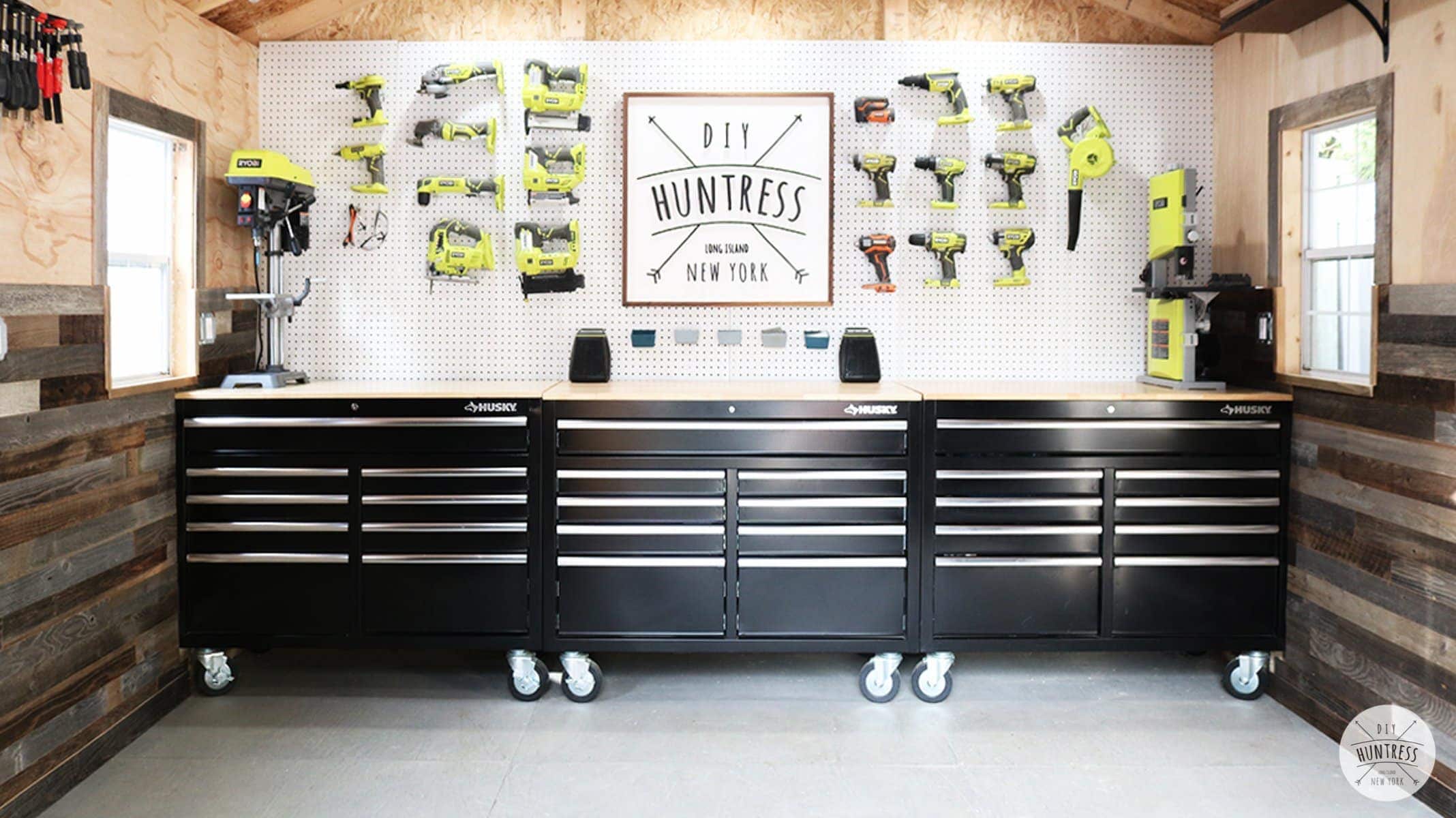 what do you think? Cancel reply

This site uses Akismet to reduce spam. Learn how your comment data is processed. 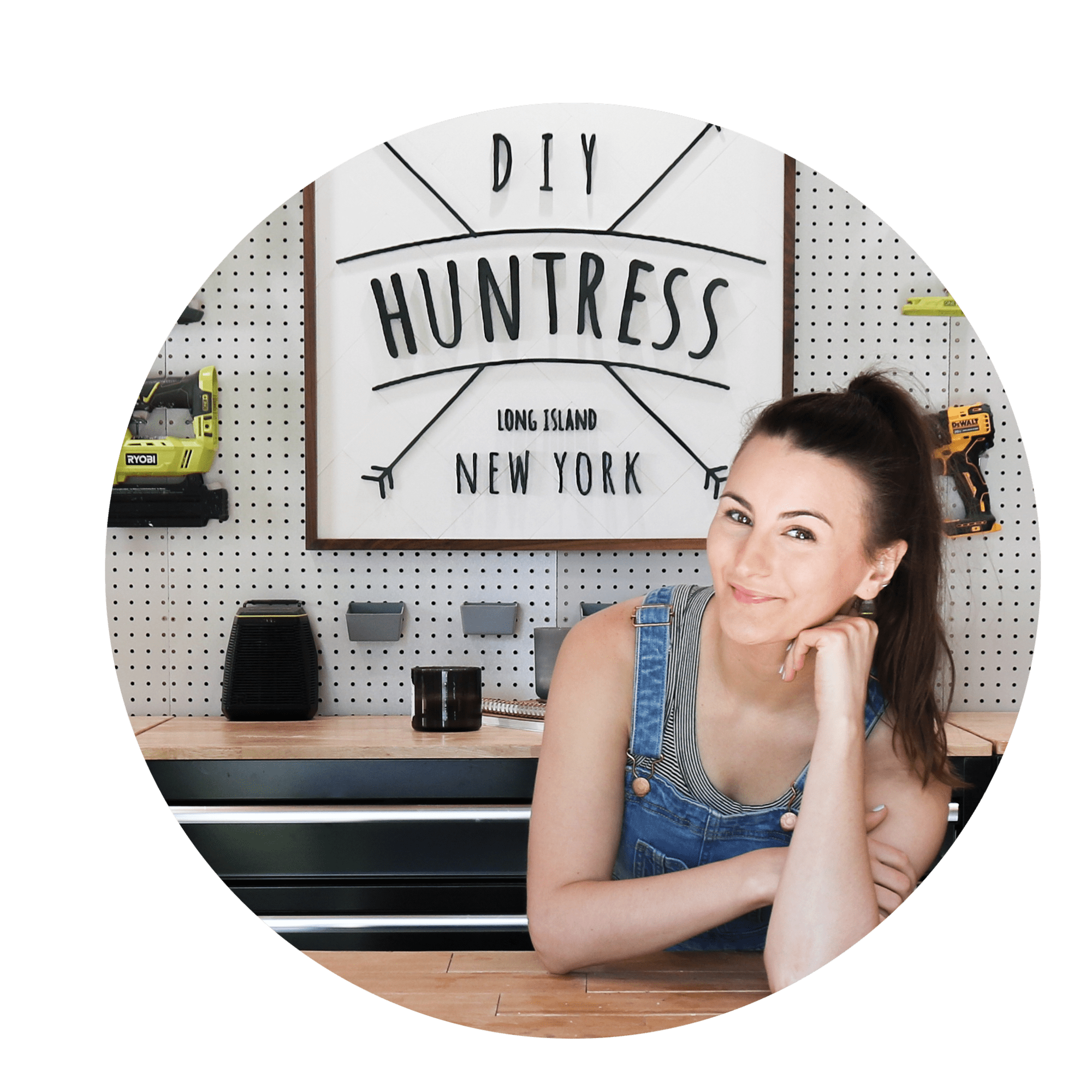